We are now counting down to the next major event for FIFA 16, which should be the highly anticipated FIFA 16 TOTY release date for Ultimate Team players.

For those unaware, this will be available in the middle of January as EA always stick to the same pattern. As for the FIFA 16 TOTY predictions this year, these can be guessed easily by the community as EA will largely base them on the real life FIFPro World XI team as well as the Ballon D’Or nominees.

Since the Ballon D’Or shortlist and the final three have already been revealed to between Lionel Messi, Ronaldo and Neymar – it is guaranteed that these three players will automatically be in the TOTY.

Two players that have performed well is Luis Suarez, along with Kevin De Bruyne who had a great run of form for Wolfsburg before moving to Manchester City – will both be able to find a slot in the main TOTY lineup though? 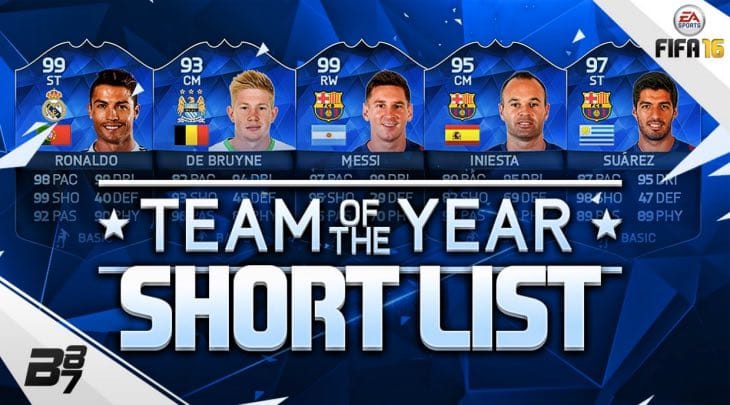 For those asking when FIFA 16 TOTY is out, it should be the week starting January 11th, which is a Monday. This is when the Ballon D’Or event takes place and EA should be revealing the full TOTY lineup afterwards and also the release of the Defenders and Goalkeeper on the same date.

Then, on Wednesday January 13 the TOTY Midfielders for FIFA 16 should be available in packs, followed by the Forwards on Friday January 15.

You can get a reminder of the likely TOTY cards for January by taking a look at the video which we’ve added below from Bateson87. If any of the schedule changes above we will update accordingly.

Have you had any luck getting TOTY cards for FIFA 15 in the past – how confident are you that you’ll be able to get one for FIFA 16?