We are closing in on TOTY for FIFA 16 and now we can see that EA has begun their marketing campaign for the biggest event that players look forward to after Christmas.

You may not have realised, but EA launched a FIFA 16 TOTY Advert on Sky for a league cup match between Stoke and Liverpool hours ago.

Many of you would have missed that, but don’t worry as EA has said that they will be re-airing it at 12pm UK time on Wednesday January 6. 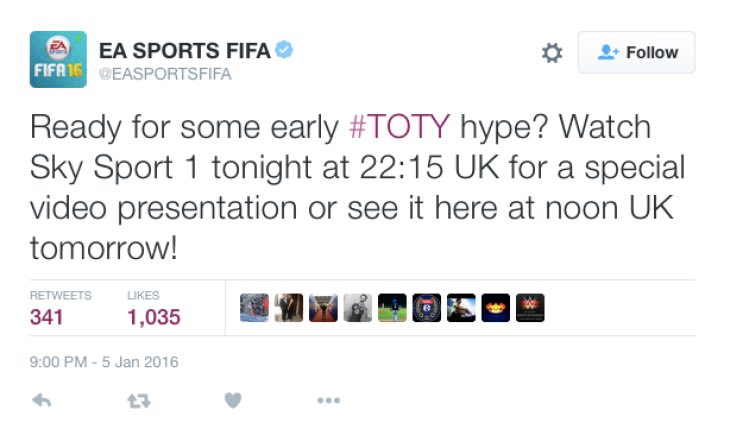 This won’t be the TOTY reveal for FIFA 16 just yet as this will happen on January 11 – schedule here. However, it should provide a nice teaser on what is to come and remember that TOTY will be influenced by those selected in the FIFPro World XI that FIFA will reveal on the same day.

Did you manage to catch the Advert whilst watching the football last night, if so what did you think of it? Head back here later and we will add the video below once EA makes it available.

What are your last minute predictions for TOTY? Don’t forget that TOTW 17 is coming on Wednesday evening too!