We have a quick heads-up to remind all FIFA 16 players that the TOTW 4 lineup is almost upon us. We have already given you the TOTW 4 predictions here, but now we have the confirmed FIFA 16 TOTW 4 release time for when the packs will be available in-game.

Having said that, most of you should already be well aware as EA always stick to the same schedule. For those asking what time is TOTW 4 out in the UK, it will be from 6PM in the evening UK time on both PS4 and Xbox One.

As for the official lineup, this will be announced on EA’s Twitter page at any minute – a rare Aguero card is a certainty to be included.

Community Manager Chu Morah has even teased that one of the IF pictures this week is really ‘cool’ and bound to make fans laugh, so it will be interesting to see who it turns out to be.

We don’t have long to go so if you haven’t beaten the TOTW 3 Active Challenge for those extra coins, now is the time to do it. Also, if you still want to brave some pack openings to get an IF Sturridge or Hero Lewandowski – you need to do that before 6PM UK.

Check back here later and we will update this with the full TOTW 4 team very soon. Have you been saving your packs from FUT Draft for TOTW 4?

Update: The confirmed TOTW 4 for FUT 16 is now live. Some great choices this week and take a look at that Hero Aguero card – Ozil isn’t bad either. 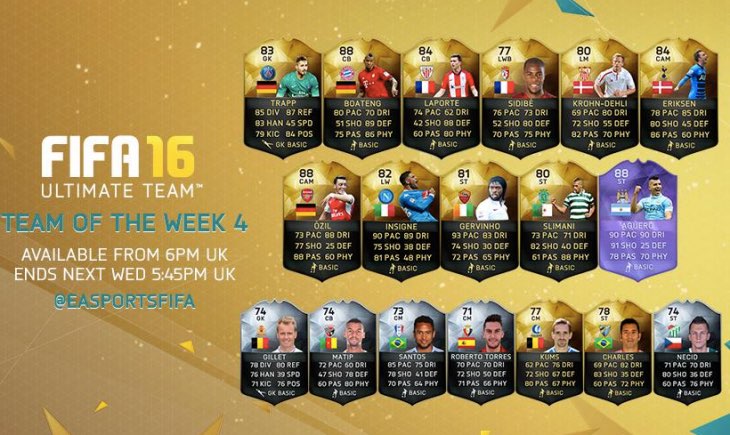