Fans are excited about the upcoming TOTS for FIFA 16, which we’ve already told you will start this Friday on April 29. Before that though, everyone wants to know when the FIFA 16 MC release time will be for Ultimate Team.

If you don’t know, the special TOTS MC cards are usually deployed right before the start of TOTS Defenders and Goalkeepers. The MC cards are ‘most consistent’, which are players that haven’t done enough to get multiple in-form cards throughout the season but have still performed well.

EA did this last year for FIFA 15 and it arrived on the same day as TOTS, May 20 2015. It was announced at roughly 6PM UK time, but the cards didn’t actually go live in packs until 9PM on Xbox, 10PM for PlayStation and 11pm on PC and mobile. 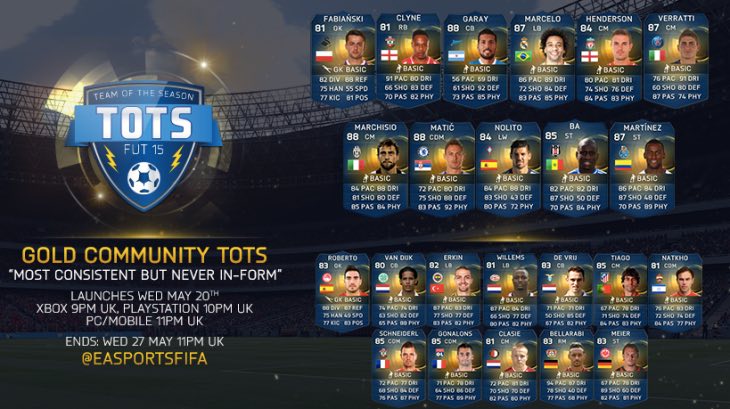 You can see confirmation of the format above, as a reminder. If EA sticks to the same schedule, then we could see the Community Gold FIFA 16 cards on Friday April 29 starting from 9PM.

It’s not 100% confirmed yet, but a nice heads-up for you that you should appreciate. Without further ado, enjoy the confirmed TOTS MC Gold team below which EA will release on Friday.

Are you happy with the picks?