The latest round of FIFA 16 player ratings for Ultimate Team is now live. EA has revealed the FIFA 16 FUT 40-31 player ratings and for Manchester United fans there may be one or two shocks in store.

We can tell you straight away that new signing Bastian Schweinsteiger has had a big downgrade from an 88 to an 86 on FIFA 16 UT.

Obviously the player has moved from Bayern Munich, but we didn’t expect to see a -2 to his overall stats – perhaps a -1 would have been sufficient and it seems that many fans are thinking the same thought on social media.

Elsewhere, Wayne Rooney is now confirmed to have the same rating on FIFA 16. He’ll ship with a rating of 86 in the game which should keep some fans satisfied after being unhappy about their new favorite German. 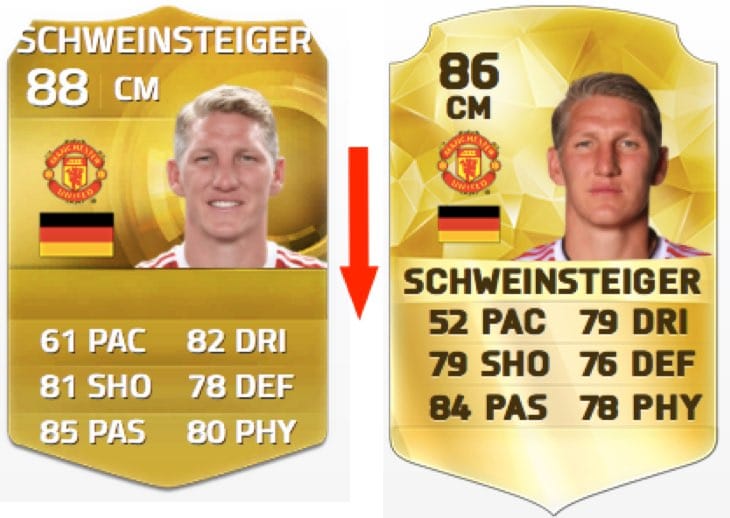 The biggest upgrade in EA’s latest ratings goes to Juventus star Paul Pogba. An ex-Man United player himself, he’ll now be in FIFA 16 FUT as the 31st best player in the game with a rating of 86.

This is a +2 to his rating from FIFA 15 and a big upgrade to his individual stats compared to his 84 after the Winter upgrade. We have some useful images to show you which gives you an exact idea of the stat changes between FIFA 15 and FIFA 16 for both players – thanks to FUTHead.

Are you surprised with the downgrade for Schweinsteiger’s stats or not? Let us know your predictions for the FIFA 16 FUT 30-21 ratings.