It seems that there are still major problems with FIFA 16 FUT down on PS3, despite a recent statement from EA which said most players could now sign-in to the FIFA 16 Ultimate Team servers.

Now, we have an update to bring you on the situation, with many players still complaining that the FUT servers are down for PS3 on November 25.

To recap, EA took the PS3 FUT servers down on Friday due to an issue regarding ‘abnormalities’ which they haven’t gone into detail over. 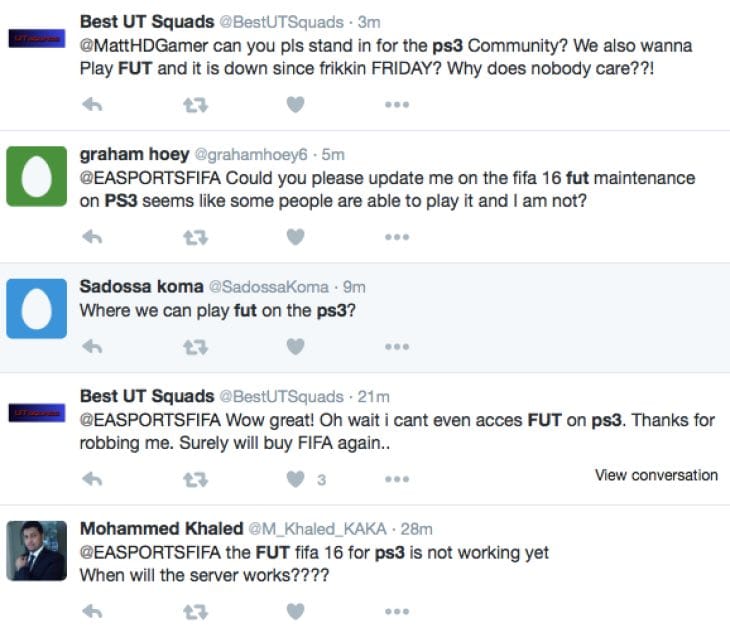 Now you can see the official update below from the developer as of Wednesday November 25, stating that FUT 16 servers are back up on PS3 for the ‘majority’ of players.

EA has also offered a compensation package of one free draft token and also two Premium Gold packs worth 15,000 coins as their way of saying sorry for the continued downtime.

We have added some live feedback from PS3 users above via Twitter which you can see, confirming that many cannot still sign in and no indication on whether full service will be restored today, or if downtime will carry on for another day.

Is this highly frustrating for you at the moment? Do you get the sense that next-gen is being prioritized? Let us know if FUT servers are down on PS3 for you, since other players have told us that they can now sign in again.