One of the most pressing matters in FIFA 16 right now, is the ongoing discussion regarding the FIFA 16 FUT Draft Rewards list for online and offline play and whether you get the same rewards for FUT Draft offline as you do online.

It looks like at the moment the general consensus is that you do get the same rewards if you play FUT Draft offline compared to online – regardless of which difficulty you are playing.

The key differentiator for rewards seems to be how many games you win so it goes without saying that each time you enter FUT Draft you definitely want to win 4-0 matches to take home the best prize.

So far, we have seen varying rewards for different players. If you win at least 2 of the four games, it looks like EA will reward you with at least two gold packs to open as your main prize.

However, some of the prizes that we have seen for winning all four games include Jumbo Premium Gold Packs, Rare Player packs and also Rare Gold packs.

That is not bad at all when you think that you can have the chance to get the best players in the game inside of these packs.

EA has given every single player 1 FUT Draft token for offline and 1 FUT Draft online token – after that though you’ll need to spend your own coins or FIFA points to play. 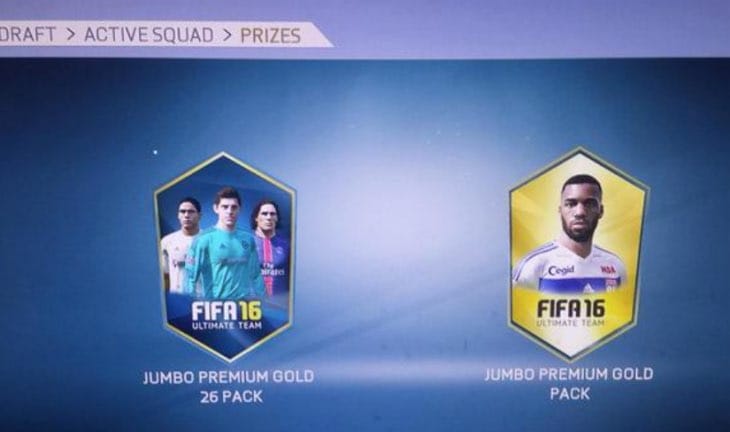 Is this the best new investment potential that FIFA 16 has to offer? After all, a 15,000 entry should get your your coins back plus unlimited profit potential if you pick out a 85-90 player worth hundreds of thousands worth of coins.

Let us know your FUT Draft rewards for offline and online below. Has your rewards got better or worse depending on how many times you have entered the draft?

Share results below and let’s try to figure out the exact system that EA are using.