For those that have just picked up their copy of FIFA 16, we now have some useful information for you to take a look at with the FIFA 16 best young players for Career Mode potential ratings.

This is a very big deal in the world of FIFA 16, as players will want to know who is the best young player to buy in FIFA 16 that has great potential to upgrade to a much higher rating over the course of the season.

The good news, is that EA has already made your life much easier. You may not realise but the developer has given fans a head start by unveiling their official list of FIFA 16 hidden gems for potential ratings.

We have given you a preview of that below, but if you want the full document you can view and download that here. It shows players like Depay who has a Career Mode rating of 81, but a potential of 89 making him one of the best buys you can make for a young player in Career Mode. 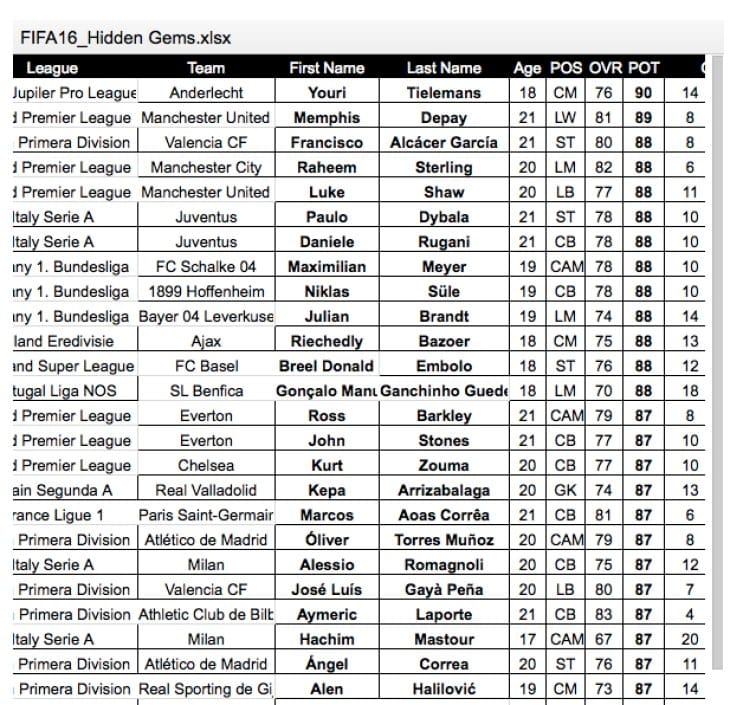 Raheem Sterling is another one. You can buy him with an overall rating of 82, but treat him right, celebrate his birthday and you can boost him up to an 88 which is pretty impressive.

For those that prefer a visual guide, we know that a lot of you have been tuning in to Mgh’s guide on the FIFA 16 Best Young Players for goalkeepers, defenders, midfielders and strikers.

He has already unveiled all positions except strikers on his YouTube channel here – so keep tracking that for the striker reveal very soon – all of the ratings are still from EA’s chart though above.

So there we have it. Have you spotted your own FIFA 16 hidden gem for young players that isn’t on the list but have performed well for your team?

We would love to hear your recommendations below so let us know who you have bought.