We now look ahead to the next major FIFA 16 update for PS4, Xbox One and PC, with EA already at work on the FIFA 16 1.04 update which will also be known as the FIFA 16 Title Update 4.

To recap, EA has recently launched 1.03 for the game bringing star heads for some players, third kits for Barcelona, Inter and Roma at last and also a fresh wave of much needed online matchmaking improvements.

Now, we want to know what your most requested FIFA 16 1.04 patch features are since the update could be very close to landing.

One thing that we would definitely like to see is more transparency and options when it comes to facing off against online opponents that clearly like to play the game with the sole purpose of annoying other opponents. 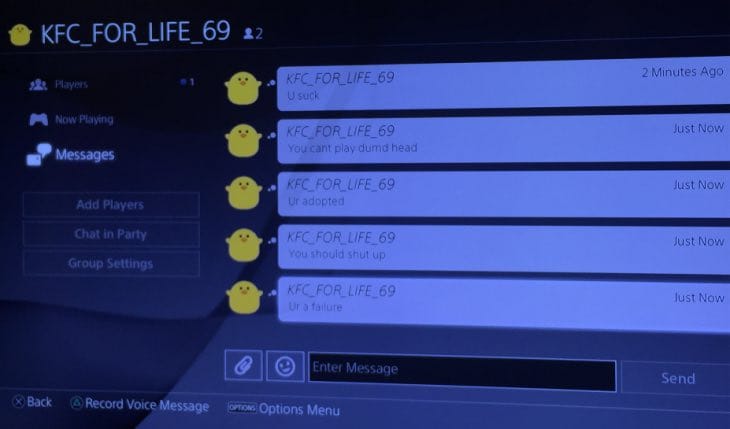 We could be wrong on this, but there doesn’t appear to be clear cut instructions on how to mute an opponent on FIFA 16 online – if there is, EA certainly do not make it clear to players.

Sony are no angels either when they decide to leave the PS4 public message option set to yes by default – opening yourself up to trolls as pictured above who take great pleasure in dishing up a serving of teenage abuse after a game.

We’ve lost count at the amount of times we’ve had to put up with a 10-15 year old screaming down the mic trying to put you off, or insisting on playing music when they know it will drive the other player mad.

Why hasn’t EA made it easier to disable this, or provide a clear report button for persistent offenders who continue to abuse the mic feature?

That’s just one area in which we would like to see an improvement but we’re sure you have other requests to tell us about.