Attention all FIFA 15 players now, as most of you will probably want to know when the FIFPro World XI TOTY start time for UK and US will be.

You’ll be pleased to hear that we now have the information for you, as well as information on how you should be able to watch a FIFA World XI event live stream as well so you can see the reveal live.

This event is tied-in to FIFA 15 of course, as just moments on from the event EA will announce their FIFA TOTY squad as well – then unleash the first batch of FIFA 15 TOTY defenders and the goalkeeper into FIFA 15 Ultimate Team packs. 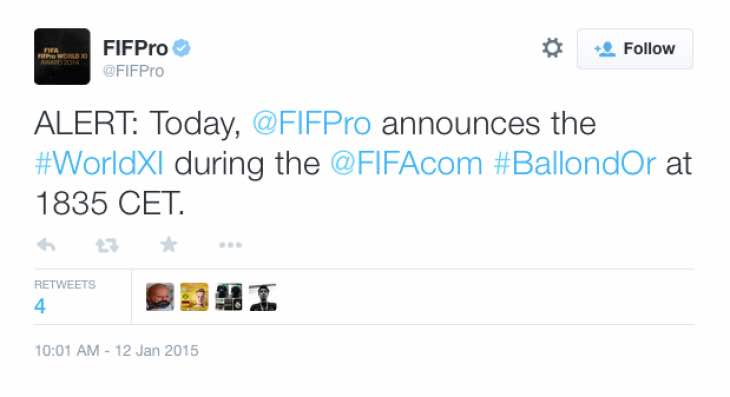 Without further do, FIFA has confirmed that the Ballon D’Or start time for the team of the year announcement will start around 18.35pm CET, that’s Central European Time for those that don’t know.

So that means, the World XI reveal time for UK will be 5.35pm, as GMT is one hour behind Central European Time. For our readers over in the US who are also eager to find out the team for FIFA 15 purposes, the reveal will be at 9.35am Pacific Time and 12.35pm Eastern Time.

After the announcement is made by FIFA, then it is business time for EA as it means that FIFA 15 TOTY packs for Defenders and Goalkeepers will be going live soon.

If you live outside of the US, you may be able to watch a live stream here as well over on YouTube. We can see that it is currently counting down to the event as we speak so you should bookmark that.