These last few days have been a little hectic, what with Google and Apple launching new products we completely let the FIFA 15 Ultimate Team app update go by without a mention. The app was updated for Android and iOS and with it brings a few tweaks in order to make your 2014 season go even more smoothly than before.

EA Sports says there have been improvements made off-pitch, which means you will now be able to get into a game much faster than before. Not only that, but there have been several improvements made to the overall gameplay and visuals, especially for those playing on a device running iOS 8. Android has not been left out, as this latest FIFA 15 UT update now gives you a far better experience thanks to immersive full-screen support. 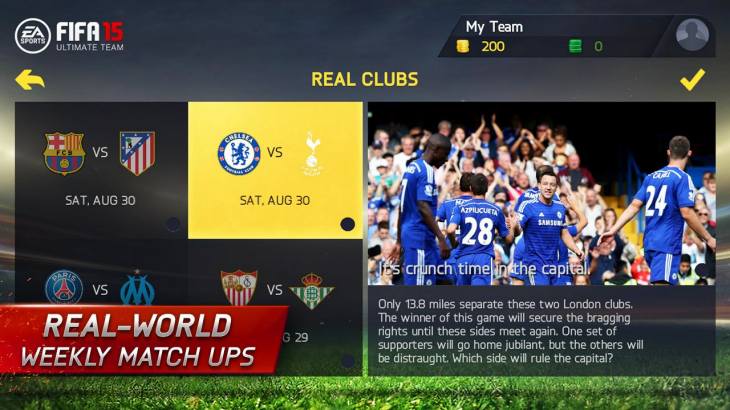 It is clear to see these FIFA 15 Ultimate Team changes have made a positive impact on users, although as always, such updates never go off without problems.

There seems to be growing concern that following these changes PSG is almost impossible to beat, and we would love to know if you are in agreeance with this?

We have also been informed of an issue that some users are experiencing, and that is, ever since the update affected players get sent back to the home screen all the time. They have tried to uninstall and re-install the game but to no avail.

Have you noticed any issues since this app was updated, and what are your thoughts on the changes so far?