It is almost time once again for FIFA players to enjoy and countdown towards the FIFA 15 Team of the Year UK release time. We know that many of you are asking what time does the FIFA 15 TOTY announcement begin and now we could have the vital information for you.

The FIFA 15 Team of the Year announcement may actually not be too much of a surprise this year, as we can see that many fans seem to have their own predictions set on who is going to be included.

FIFA 15 TOTY Ronaldo is almost a certainty, while there can be no TOTY awards without Lionel Messi too. One thing is certain though, it will be a big shock if Luis Suarez will not be on the FIFA 15 TOTY squad as he had a breathtaking season for Liverpool, earning his transfer to Barcelona in the process.

Now, let’s get down to business. EA will announce the FIFA 15 TOTY on Monday 12th January, which is the exact pattern which they followed last year – the second Monday of January which follows on from the 2014 Ballon D’Or announcement that will take place on the same day. 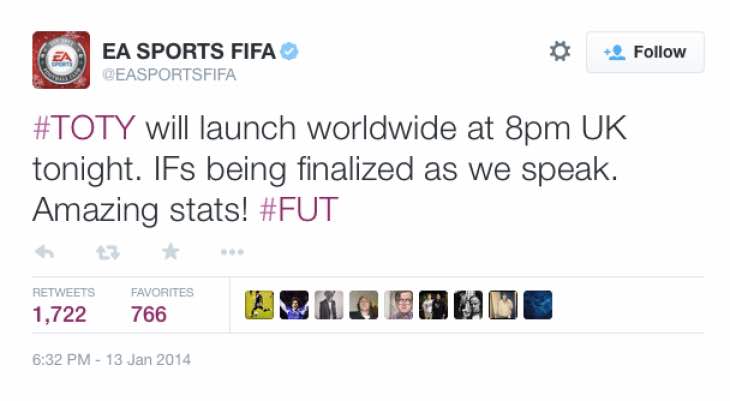 After the announcement is made and the winner is unveiled, EA will then get to work and release the FIFA 15 Goalkeepers and Defenders TOTY to players later in the evening.

We have managed to dig out EA’s Tweet from last year, which confirms that the first batch of Defender and GK cards were launched in FIFA 14 at 8pm UK time.

Following this formula, we can give you a heads-up that the FIFA 15 TOTY UK release time on January 12, 2015 will be at 8PM GMT – as long as EA stick to the same pattern.

Obviously it is not a confirmation, but as far as we’re aware no possible time has been mentioned yet so it at least gives you an idea.

It’s a certainty that Neuer, Lahm and Ramos will be selected as Goalkeeper and two defenders respectively, but who will take the other slots in defence? The midfielders will be released on Wednesday January 14, followed by the FIFA 15 TOTY strikers release time on Friday January 16 – Messi, Ronaldo and Suarez a certainty again?

Let us know your thoughts on the upcoming event and if our information has been useful for you on a possible time for the unveil. Who are you expecting to see in the full lineup – feel free to drop your lists below!