The FIFA 15 TOTY nominees were announced last month within an Ultimate Team shortlist and during the predictions taking place this weekend, it looks like some people have forgotten those that made the original cut. Today, we want to remind Product Reviews readers about the football players that could possibly make the real FIFA 15 UT TOTY tomorrow when the results are revealed.

Below our article looking at the FIFA 15 TOTY release time, taking place Monday Jan 12 2015, we noticed one of our readers saying “Luis Suarez won’t be in TOTY. He was never in the 12 forwards nominees”. 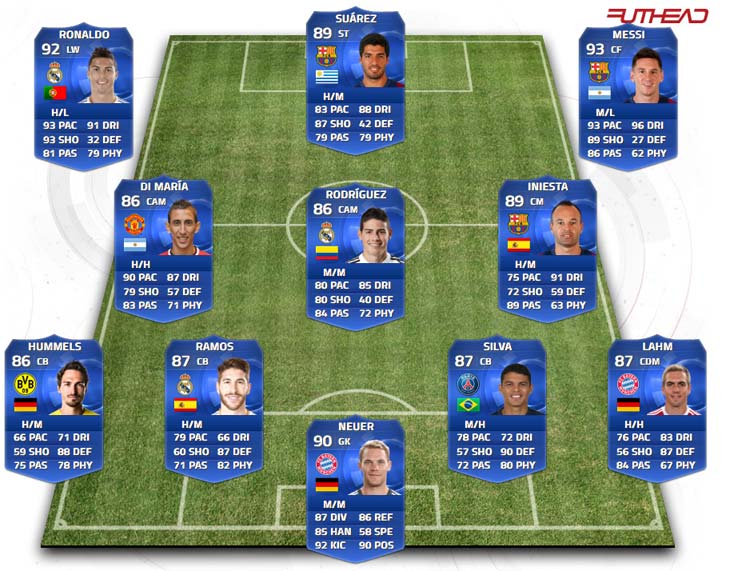 The futhead.com FIFA 15 Team of the Year can be seen within the image above, which included players predicted to be in the FIFA World XI by their own expert. The names mentioned above in the FIFA 15 TOTY shortlist were all featured on FIFA.com last month, although the official team is revealed tomorrow on Jan 12, 2015.

We have featured two videos below this article that include the official FIFA FIFPro World XI shortlist for forwards and the FIFA 15 Ultimate Team TOTY prediction video featured on Twitter a few days ago. This includes predictions by Rio Ferdinand, Adebayo Akinfenwa, Kyle Walker, and Joey Barton.

What would be your predicted FIFA 15 UT Team of the Year and do you agree with the Futhead prediction?