Earlier on we told you that EA had released the first part of the FIFA 15 FUT TOTS with some special community packs. Now though, we look ahead to the main event as we know many of you are asking for the FIFA 15 TOTS release time and date on PS4 and Xbox One.

Traditionally, EA releases their final selection for TOTS at the end of May, although obviously the developer may decide to withhold their selection until June.

We can remind you that EA does like to stick to patterns though year on year. For example, the FIFA 14 TOTS was revealed on May 28 at precisely 4PM UK time. 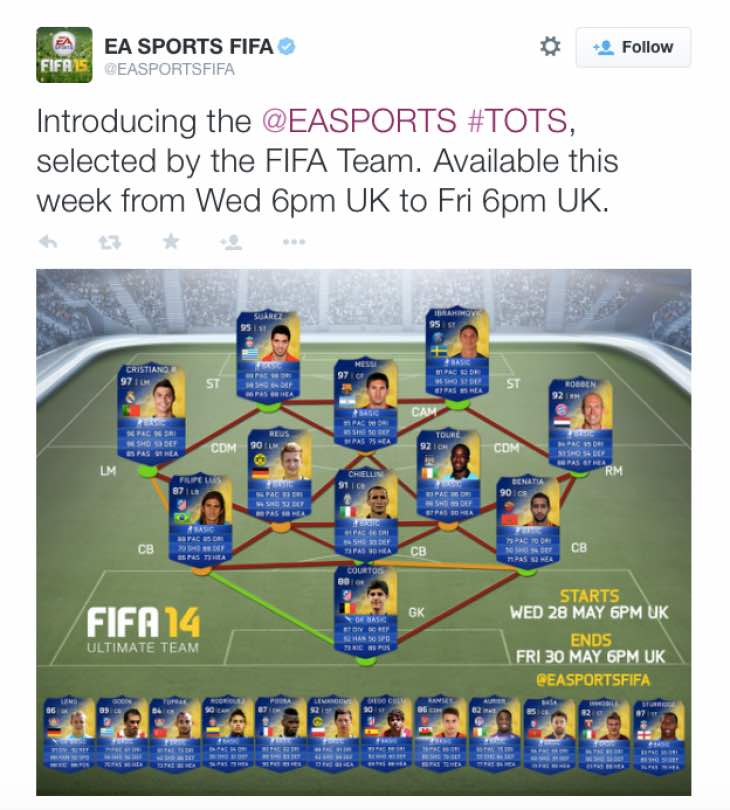 We know this as we’ve dug out a Tweet from EA’s FIFA account last year. Crucially, it also reveals that the packs went live in-game at 6PM UK time.

Remember the defenders and goalkeeper will be released first, followed by the Midfielders on the Thursday and finally the Strikers on Friday at the same times.

Obviously we can’t say for sure if this is the official date, but it’s a very good heads-up since EA has been sticking to the same end of May pattern for a few years now.

For those wondering what time will the FIFA 15 TOTS packs go live, 4PM on May 27 UK time is a safe bet. Let us know your thoughts on this and your predictions on who you think should be selected.