The official EA Sports FIFA 15 Twitter account has confirmed that servers are down today, as we reported earlier with EA and Origin login problems, and they are now investigating exactly what’s going on right now. The problems seem to be directed at Origin and EA confirmed this themselves earlier today, but now we are almost an hour into this outage, it seems some people are getting very frustrated.

We have also seen confirmation that it’s not only FIFA 15 servers that are down today, but also other games from EA are not working. This includes NHL, Madden 15, Battlefield 4, and more that see thousands of tweets asking why the servers are not working, or even apps that won’t login.

You can see one of the first tweets from EA SPORTS FIFA that confirmed they were “investigating”. The amount of tweets stating “FIFA 15 servers are down”, or EA server issues, has hit a high for November. This seems to be one of the biggest outages for the franchise this month, although it’s understandable when you consider this looks like an attack directed at the gaming company. 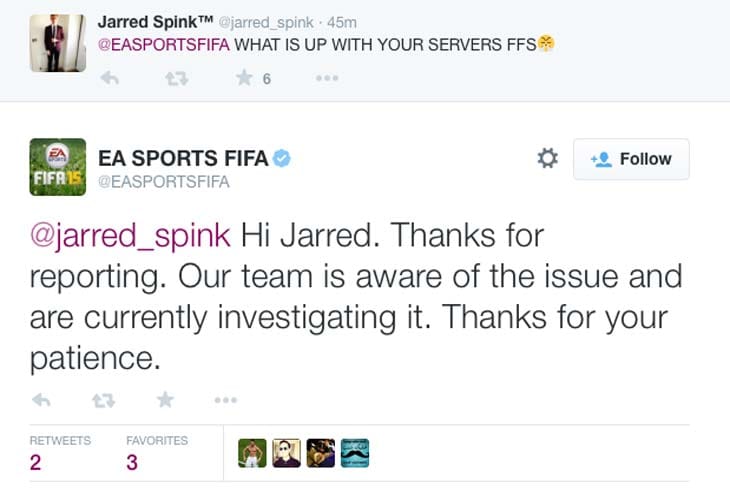 It is worth pointing out to our readers that this type of attack, if it’s Lizard Squad, is very hard to stop even for a multi billion dollar company like Electronic Arts. This is why you might just have to put up with the FUT app, FIFA 15, and the games not working online until this attack stops, or the company find a temporary fix.

Is FIFA 15 down for you right now and if so, did you notice it was EA server issues right away? The last update from EA came just a few minutes ago, and they reported “Our team is still investigating”. It’s clear a little more clarification would be welcomed by the players.

Update 1: Just a few seconds ago, EA offered the update below that finally confirmed “EA servers are down” and it could impact your “sign in ability”.

EA’s servers are currently down. This may impact sign in ability to EA games/services. We’re working to resolve this as quickly as possible.