We have a quick heads-up to bring you now, for those that are still playing FIFA 15 on PS3 and Xbox 360 consoles. EA has sent out a warning, reminding players that FIFA 15 servers for FUT and the Web App will be down today for brief maintenance.

The good news is that the maintenance will not last long. In fact the FIFA 15 servers should be back up in just 30 minutes time according to EA’s statement which they posted on their forums.

The key thing you need to know is that the FIFA 15 FUT servers will be down at 10pm Pacific Time on January 29. For those in the UK that is 6AM the following morning, or 1am for those on the eastern Time zone in the US. 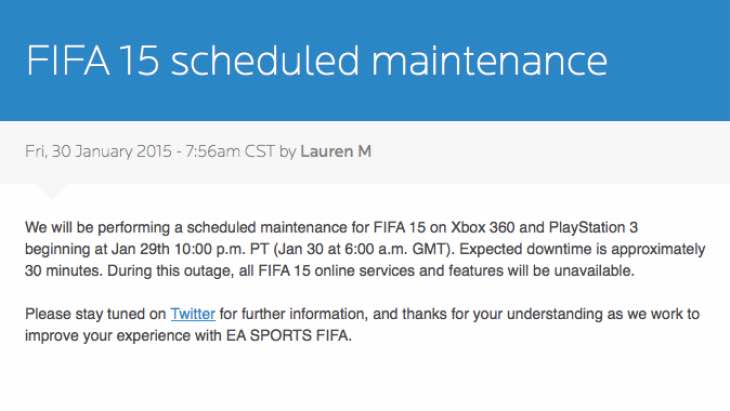 EA states that during the maintenance, all FIFA 15 online services will be unavailable so bear that in mind. In previous maintenance windows, we’ve seen the downtime last longer than the scheduled time, so hopefully this won’t be the case here.

How many of you are actually playing FIFA 15 on old-gen hardware – are you still happy with the experience compared to next-gen?