EA has again decided to set the record straight on why they have made so many changes to FIFA 15 FUT recently, with regards to FIFA 15 Coin sellers and the fact that players remain unhappy with the developer.

The fact of the matter, is that EA are doing it for the balance of the game as they say these changes will ultimately help to discourage exploiters from ruining the game.

By introducing price ranges to FIFA 15, they say that it will create a fair and secure environment for all players – and we agree that something drastic had to be done to stop it getting out of control. 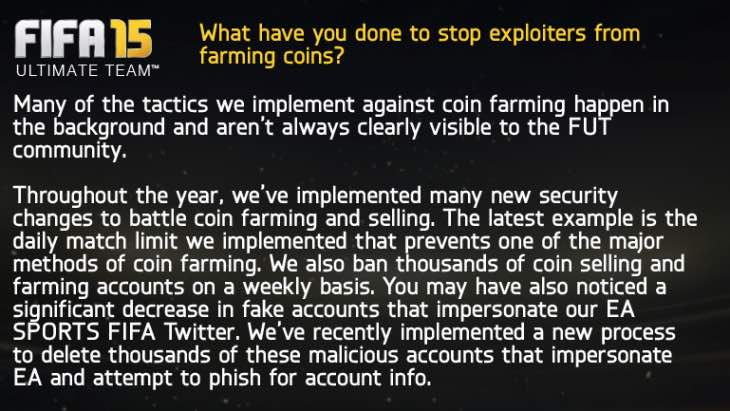 We’re also happy to see that EA appears to have found a way to get rid of the hundreds of Fake EA Sports Twitter accounts that continuously look to dupe FIFA players into giving away their details.

If you head to EA’s official Twitter page, you’ll see that EA has now listed a series of new FAQ pages, attempting to clarify once and for all that the changes being made are for the good of the game.

Despite that, we can still see some mindless FIFA 15 fans from the UK who continue to hurl some disturbing abuse at the developer – simply because they are upset that they can’t cheat the system any more.

Are you still unhappy with EA’s changes to FIFA 15 FUT? Give us your thoughts on how you feel the system is now, a week after EA introduced the Price Range changes.