The new FIFA 15 1.05 update just went live today on PS4, which has a file size of 328.3MB with detailed patch notes as well. Normally, when you click update history on PS4 game icons you won’t see a detailed changelog for many games, although this FIFA 15 PS4 update on March 9 has full patch notes given.

We have included a couple of screenshots on this page that detail the file size and latest update history for FIFA 15 on PlayStation 4. You can clearly see the 328.3 MB size, much smaller than many downloads, and also the full 1.05 PS4 update notes. Again, the list of changes isn’t particularly long. 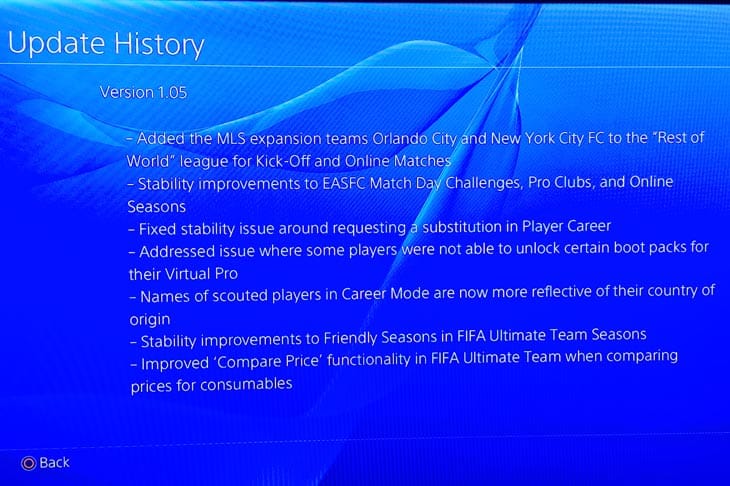 The patch includes stability improvements to Friendly Seasons in Ultimate Team Seasons, other improved functionality to the Compare Price feature in FUT, and other stability issues have been fixed on PS4 in Pro Clubs, Online Seasons, and EASFC Match Day Challenges. You will also see the MLS expansion teams have been added to the “Rest of World” league for Online Matches and Kick-off, which include New York City FC and Orlando City.

Did your FIFA 15 PS4 update install without problems, or did your download hit an issue? If you did have any issues, or even think something is missing from this update, then we would love to hear about it.