If you are a FIFA 14 player, you will probably already know that the FIFA 14 TOTY or Team of the Year is live. This annual tradition has now been confirmed with FIFA’s official TOTY, meaning that you will now be able to get special versions of players in FIFA 14 Ultimate Team with updated stats.

What you may be more surprised about though, is the full FIFA 14 Team of the Year, which doesn’t include Luis Suarez. Has his reputation got the better of him on this occasion, as his recent form this year and during the previous year cannot be disputed.

Either way, the lineup is final and EA has used the exact lineup that FIFA has opted for. The full FIFA 14 TOTY is as follows:

These players are now going to be up for selection in FIFA 14 Ultimate Team, with increased stats as mentioned above. EA has already gone live with the goalkeepers and defenders first – they will be available to get in packs until 6pm UK time on Wednesday night, then we’re presuming midfielders will then become available. 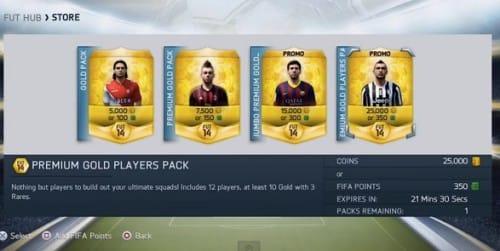 Luck is going to be the main essence here, as the chances of securing a FIFA 14 TOTY player are still very slim. Hopefully some of you will have some good fortune, as it very painful to say the least when silver players turn up in a Premium Gold pack.

Let us know how you get on with opening your Gold packs, good luck everyone and tell us if you manage to get one of the defenders or goalkeepers listed above!

On a side note: Are you also surprised that Luis Suarez is not available as a TOTY player?