Just when you thought that Juan Mata’s transfer to Manchester United from Chelsea FC was exciting, Chelsea appears to have angered Liverpool FC by snooping to sign the highly rated Salah from FC Basel.

We have a quick heads-up on how the player performs in FIFA 14 at the moment, as well as posing the question on whether EA will upgrade his stats in preparation for the Egyptian’s arrival at Stamford Bridge.

This player has been dubbed the ‘Egyptian Messi’, so you can understand why Chelsea boss Jose Mourinho wanted to snap him up rather than see him go to a Premiership rival.

FIFA 14 players though have been wondering where the player will fit in though in Chelsea’s team, with so many star players to choose from in midfield – surely he’s not arriving to sit on the bench? 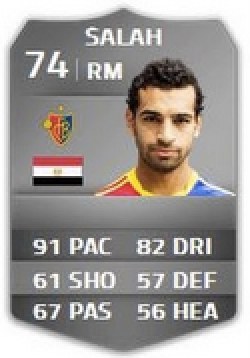 At the moment, Salah has an overall rating of 74 – a silver card which some of you may be thinking deserves a little attention from EA. He is famous for his pace and skill though and you can see that reflected in a 91 pace ability and an 82 dribble skill.

Will you be putting Salah straight into your own FIFA 14 Ultimate Team? Watch the analysis videos of this player below and let us know about your thoughts on his move to Chelsea.