As we kick off another week, it’s time to take another look at a PS4 Vs Xbox One graphics comparison. So far we have looked at Assassin’s Creed 4, COD Ghosts, Battlefield 4 and NBA 2K14. There wasn’t much difference between these games despite the resolution differences, so how does FIFA 14 PS4 Vs Xbox One fair in comparison?

Firstly, perhaps the most important aspect to get out of the way first is resolution. Unlike other multi-platform games on both consoles, we’re pleased to remind you that FIFA 14 on PS4 and Xbox One is running at 1080p and 60FPS.

To EA’s credit, the developer announced this benchmark at an early stage, allowing gamers to get a full heads-up of the effort that has been made on next-gen versions compared to the old generation consoles.

The power of the hardware also ensures that next-gen versions are utilizing the Ignite Engine, which essentially allows the AI system to ‘think like real athletes’. Thankfully, the crowds are a lot more realistic as well, featuring actual people rather than ‘cardboard cutouts’ like we have used to become seeing on previous versions down the years. 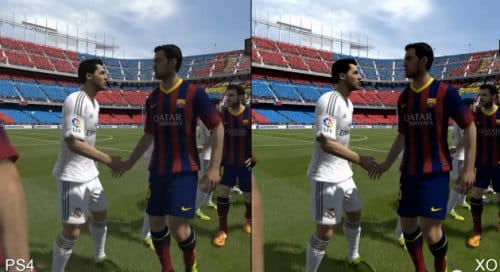 In terms of graphical comparisons, we have to say that the changes are very minor. You will do well to find some ground-breaking clear-cut differences between the two versions, as it’s clear EA has made a big effort to ensure that complete parity is split between the middle.

The visuals look the same in terms of facial models, but we do notice that the Xbox One version seems to have some sort of extreme contrast mode enabled. The PS4 version is darker in comparison, but doesn’t necessarily look worse either.

In fact we’ve heard from some of you who have also noticed the unusually high contrast levels on the Xbox One version of FIFA 14, by saying that the PS4 looks a lot more natural between the two.

What do you think about this? Check out the graphics footage from Digital Foundry that we have included and give us your say. What is your explanation for the high contrast on Xbox One?