With the FIFA 14 patch already live for PC, it was only a matter of days before console versions were made available to download. We can now tell you the FIFA 14 update for the Xbox 360 has been released by EA, although there is no sign of it on the PS3 just yet.

It is the hope that this update will bring an end to the FIFA 14 problems, such as freezing issues, and while EA has said they have managed to locate some of the reasons why the game would often freeze for players, not all of them have been eradicated.

EA has asked that you keep them fully informed if you still have issues following the update, as they rely on this feedback to help make further improvements to FIFA 14.

You can see the FIFA Title update notes below, which includes improved defender switching during crosses, improvements to the Dynamic Camera and so much more. 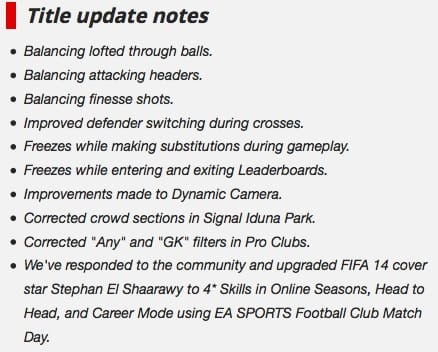 There have also been some player upgrade requests, which we discussed the other day, but we know this update will be later down the line.

We can see FIFA 14 fans sharing the love on EA Forums, saying how happy they are that the update is now live for Xbox 360. There is still bewilderment as to where the PS3 patch for FIFA 14 is, and we can already see a few Forum members suggesting it will not be released until tomorrow. But would you agree?