While most of you enjoy playing FIFA 14 with your friends, we have a rare treat for you to witness now. EA has managed to arrange a FIFA 14 tournament for Liverpool FC players, featuring a showdown on the game between Jordan Henderson, Philipe Coutinho, Joe Allen and Martin Kelly.

You would be surprised at how competitive the players are at FIFA 14 as well. Coutinho hints at this when playing against Martin Kelly, even going as far to say that he is ‘addicted’ and ‘must play all of the time’.

It looks like great fun though and perhaps unsurprisingly – Jordan Henderson is eventually crowned as champion when beating Martin Kelly in the final. You can see one moment where he scores a fantastic goal playing as Real Madrid. 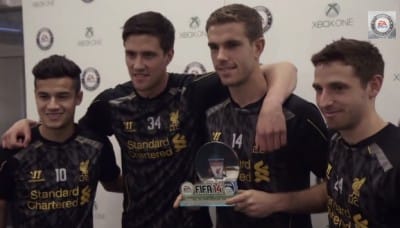 FIFA 14 is obviously one of the key games that these players will take time to play, when not featuring for Liverpool FC in the English Premier League. It’s nice to see EA arrange social events like this, hopefully we’ll be able to bring you more tournaments soon.

Do you think Jordan Henderson would be able to beat Jose Enrique at FIFA 14? Leave your comments below! Don’t forget to check out FIFA 14 TOTY details here.