You have seen plenty of information, gameplay and the reveal of Gareth Bale for FIFA 14, but there is also the little matter of FIFA 14 for iOS and Android platforms. Fans are expecting big things from the mobile version of FIFA 14 compared to the last effort and the good news is that it looks like fans are set to be pleased with how things are looking so far.

As most of you will know, FIFA 14 has already been given a release date on consoles and PC, of September 24 in the US and September 27 in the UK. What we can tell you now, is that FIFA 14 is also on the way to mobile devices, with EA confirming that iOS and Android versions will be available to download during Autumn 2013.

We now have some screenshots to show you courtesy of FIFPlay, giving you a solid idea of how the game looks when running on a mobile device. The visual look of FIFA 14 looks impressive on mobile to say the least and you’ll be pleased to know that all of the relevant licenses are in place to add that level of authenticity to mobile as to what is seen on the console versions.

Commentary is once again confirmed, but this time with support for five languages (English, French, German, Italian and Spanish), making the game as accessible as ever outside of the US or UK. The mobile version can also boast over 600 teams, 34 licensed stadiums and a very impressive 30 licensed leagues – ensuring that there’s a very good chance that your favorite team and stadium is included on mobile too. 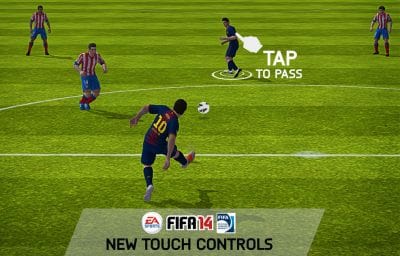 Like console, the game will also have support for EA SPORTS Football Club and it looks like there is a much greater emphasis on touch controls this time around. Check out a few screenshots here, but head to the link to see more. No word on pricing yet, but expect it to be quite costly considering it’s an EA game.

Will you be picking up FIFA 14 on iOS and Android to play on the move?