It is an exciting week for FIFA 14 players now, as EA has made a great move with their FIFA 14 TOTW 24 selections. After his blistering form for Liverpool FC, Daniel Sturridge has made his first TOTW entry with a new 83 overall in-form card.

As always though, you’ll need to open your gold packs to have a chance of getting him and it is no easy task. We can also tell you that Jordan Henderson in-form is also up for grabs, but everyone is talking about Sturridge at the moment.

Fortunately, we can already bring you a FIFA 14 Daniel Sturridge IF review as some players have been lucky enough to get him already.

Below we provide you with two videos, one showing you a video of an actual FIFA 14 TOTW 24 pack opening with Daniel Sturridge inside, and the other the actual review. 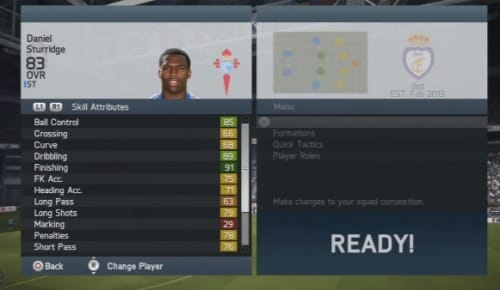 This review will give you a full glance at Daniel Sturridge’s new FIFA 14 stats with an 83 card, which features a crazy 90 pace ability, 89 dribbling skill and an incredible 91 for finishing.

There’s also some gameplay to check out, showing the new in-form Daniel Sturridge in action which you can’t miss – just check out that shot power that he now has.

For those that manage to get him, you face a difficult decision on whether to keep the card for yourself, or sell it off quickly to make a massive coin profit like many players have already.

Enjoy the videos below and let us know if you have managed to pick up a TOTW 24 in-form player this week. Good luck!