Are you excited about FIFA 13 yet? EA has done a pretty fantastic job of building up hype for the upcoming refresh and to get you in the mood while you wait for the FIFA 13 demo, EA has released a couple of brand new video teasers.

We’ve told you in the past how FIFA 13 has been used to advertise the new kits for several clubs for the upcoming new season. First up were Arsenal and their new away kit and that was quickly followed by Manchester City’s new home kit. Both were seen as ‘FIFA’ exclusives and now we have another one to show you.

Not wanting Arsenal and Man City to hog all of the limelight, Tottenham have used FIFA 13 to unveil their final new away kit that will be used for the 2012/2013 Barclays Premiership season and it features an all-new black and grey kit which Spurs fans should enjoy. 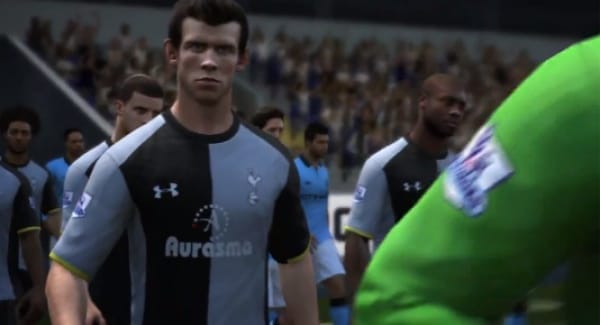 We see stars such as Jermain Defoe and Gareth Bale taking the new kit for a spin in game and it actually looks pretty good, considering we’re used to seeing Spurs on FIFA in their traditional white top. Like Arsenal’s purple away kit, the choice of colors may surprise one or two of you, but it’s great that EA has managed to strike a deal with Tottenham and use FIFA 13 as the medium to showcase it first to the fans.

The White Heart Lane stadium will also be included in FIFA 13 and the visuals look top notch, even including the official Spurs Twitter account on advertising boards – highlighting the level of detail that EA has gone to. You can spot it for yourself in the trailer below.

Harry Redknapp may have departed from Tottenham as their manager, but EA has decided that good ol Arry should still play a part in the game. EA has sent another another video ‘advertising an advert’, which sounds strange enough, but Harry Redknapp is going to play some part in the game nevertheless.

Is this the best looking FIFA game in history in your opinion, or do you feel that EA still needs to improve the graphics? We’ve read plenty of feedback from you, on how FIFA now has the best gameplay, but Pro Evolution Soccer still has the best player model graphics. Would you agree with this?