Things are starting to look really good for the Wii U. If the inclusion of the likes of Black Ops 2 and Assassin’s Creed 3 on Nintendo’s upcoming console wasn’t exciting enough, we can confirm to you now that FIFA 13 is going to be a launch title on the console as well.

EA confirmed the great news as part of their Summer Showcase this week and to celebrate, they have released a collection of screenshots showing just how great the Wii U version of FIFA 13 looks. We wouldn’t go out of our way to say they look significantly ‘better’ than PS3 and Xbox 360, but they certainly look on par in the graphics department.

Having said that, the Wii U version may end up being the best version of the game anyway – for one main reason. Take a look at the image above, which shows how you can set up your team before playing using the added Wii U touchscreen functionality. If you want to, you can even use the touchscreen controller to take free kicks without having to look at the TV at all.

For those fearing that touchscreen play is going to be the only control scheme in the game, don’t worry. EA are also adding support for the Pro Controller, which essentially means that you can play the game just as you would on PS3 and Xbox 360. This is now a launch title for the console meaning that we should see all sorts of FIFA 13 Wii U bundles pop up in the months to come. 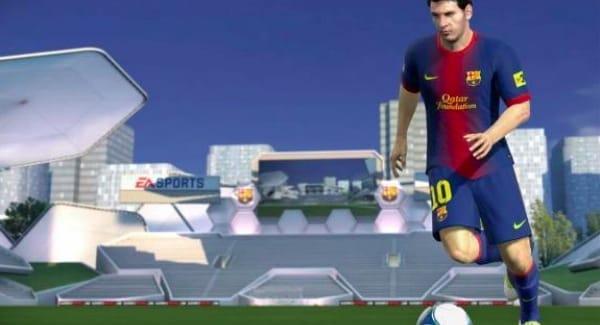 The above image you see is how Messi will look in the game. It’s ironic that Cristiano Ronaldo is the front man for PES 2013, while Messi is doing the honors for FIFA 13. Rivals for their respective clubs and now rivals for both premium football video games as well. The graphics for his model look pretty impressive from our point of view, so let’s hope that the rest of the Wii U close up models look just as good.

The Nintendo Wii U had a slow start for sure, but with quality games like this, people are going to find it hard to ignore Nintendo’s new prized asset. Let us know if you now plan to pick up the Wii U version of FIFA 13 over Xbox 360 and PS3.