EA had been teasing their upcoming TV advert for FIFA 13 and it is safe to say that it hasn’t disappointed. The TV spot features a whole host of footballing superstars and in our opinion – it’s probably the best FIFA ad we’ve ever seen.

Given that Lionel Messi is now EA’s cover star for FIFA 13, taking the place of Wayne Rooney whose contract has ended with the franchise, it’s no surprise to see Messi pop up on several occasions in the trailer. It almost reminds us of one of those typical ‘If Carling did’ adverts, as we see a regular chap walking through a FIFA universe filled with superstars and bright lights in some sort of imaginary FIFA paradise.

Hilariously, we see Harry Redknapp taking managerial tips from a kid in a make up press conference scene, with the added amusement given the fact that Redknapp is currently out of a job in real life following his exit from Tottenham. We then see the likes of Karim Benzema scoring a goal as himself on the game and Lionel Messi taking on the guy in the advert at the end of the clip in a EVO style tournament setting. 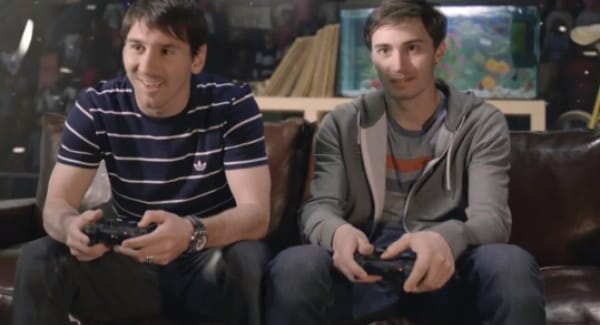 It’s action packed and we have a feeling that FIFA fans are going to love it. We certainly haven’t seen this level of detail in any Pro Evolution Ads from Konami, so some may see this as a further victory for EA over their long time football rivals. Fans in UK will also be pleased to see appearances from Joe Hart and Alex Oxlade-Chamberlain, who will join Messi on this year’s UK cover.

Can you remember a better FIFA ad than this in recent years? Take a look below and let us know what you think of it.