If you are counting the days towards the highly anticipated FIFA 13 demo which arrives on September 11, we have a treat for you to watch while you wait. Some of you may have seen this during GamesCom, but for everyone else that missed it we have a full match from the demo for you to enjoy.

We told you here how Arsenal will be one of the teams that will be available to play in the demo, alongside the other Premiership team Manchester City who also get the nod. We have a full match between Arsenal and Borussia Dortmund to show you now and it gives you a good look at the team without their ex star player, Robin Van Persie.

He is now on Manchester United’s books of course and the demo will include Arsenal’s new attacking striker Lukas Podolski. While you’ll be pleased that this big change has been made in time for FIFA 13, the demo does still include Alex Song in midfield for Arsenal rather than Barcelona, so we’ll have to wait and see if EA make the transfer before the full game is out. 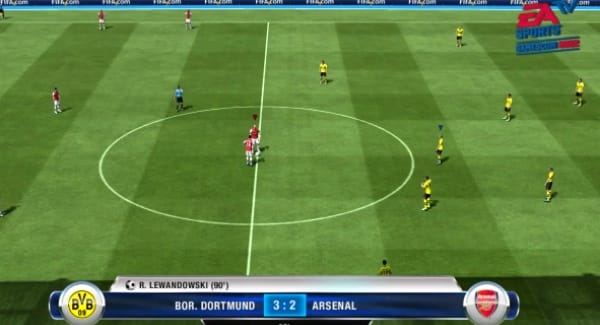 The gameplay looks fantastic and we particularly love the massive improvements to commentary that has been made. If you pay attention you’ll hear Alan Smith and Martin Tyler actually talk about the impending transfer of defender SÃ©bastien Squillaci, who may be on the verge of joining Olympiacos in real life.

It’s this level of realism that we love to see and EA were not kidding when they said they were going to enhance the way commentary is delivered in game with real time updates. Check out the full match below for yourself and let us know if you’ll be playing as Arsenal in FIFA 13.

How will you feel seeing Van Persie in Man U colors in the game?