If you are a football fan, you have probably been following the major storyline involving Wayne Rooney’s hair transplant – yes we’re being sarcastic. However, it seems that EA has also been spying on Wayne Rooney’s Twitter account as it has just been confirmed that his new hair transplant will be featured in FIFA 12.

We’re not kidding either. The news was first reported by Wayne himself on his Twitter account, prompting a media overload, a ton of obvious banter and of course, a sparkling new mop for Wayne to parade around Manchester Utd.

His new transplant will be available on view in the upcoming FIFA 12 game, which will be released on multiplatform at the end of September. In the meantime, you’ll be pleased to know that we have a screenshot to show you courtesy of Eurogamer, giving you a preview of his new hairline and how his new model looks alongside Wazza in FIFA 11. 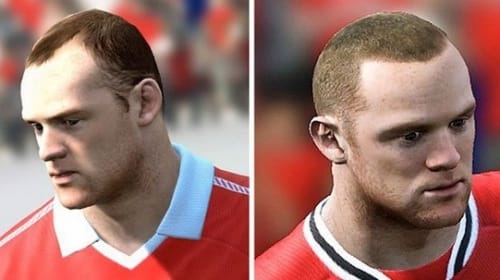 As you can see, his hair looks a lot more slicker and it will be interesting to see how far EA are willing to take Rooney’s new hairline in FIFA 12. Will it turn into a mullet, Kevin Keegan style in-game as the season progresses, or will EA just keep it like the image above permanently – time will tell.

On a side note, don’t forget that you can pick up FIFA 12 early if you have purchased the EA Season Ticket which will cost you around £17 in the UK, $25 in the US or 2000 Microsoft points for 12 months access. It will also apply for other EA Sports games like Madden 12, NHL, Tiger Woods PGA and NCAA football too.

It’s still beyond us why FIFA 12 is still releasing three days earlier in the US than Europe on September 27, since it’s more popular here. Questionable debate perhaps, but still our UK readers will agree with us on that one. – we hope. Are you getting FIFA 12 this year? If so, give us your opinions on Wayne Rooney’s new hair transplant in FIFA 12. Don’t forget that news on the FIFA 12 demo will be revealed soon at GamesCom, details on that here.