The ultimate battle of games is upon us once more as FIFA 12 takes on PES 2012 to see which the world’s best football game is. This bout has been a close one over the years as each title has its own loyal fan base following, with only the odd gamer deflecting from one to the other. This year has seen many details revealed for both games in the build-up to their release and what we are trying to find out today is which one our readers will be buying.

If you go back ten years, when anyone was asked to think of a football game, only FIFA would have been thought of. It was the same for many years after until Konami’s Pro Evolution Soccer came along. FIFA was made to look like an arcade game compared to this new simulation style version so many gamers and football fans then preferred PES to give them a better gaming experience.

PES continued to enjoy success for the next couple of years with the gameplay being arguably ahead of FIFA’s, though they were still lacking in on the graphics side of things and most obviously club licenses. The real turning point in my opinion came in 2009, when EA stepped their game up. The gameplay became more realistic, meaning they now had the licenses, graphics and gaming experience advantage over PES. It had leap frogged Konami’s game which now struggles to compete. 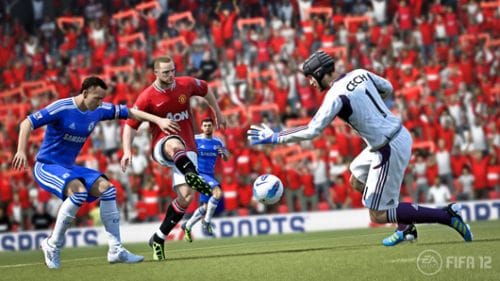 From then on I have always preferred FIFA over PES and have not been disappointed yet. FIFA 11 was a great improvement from the previous title in the series; it had more teams and had also stepped up the gameplay again. Players were now able to jostle more realistically and complete 360 degree angles were achievable when in control of a player. After playing the PES 2012 demo I was left disappointed and glad that I am now a FIFA man. Let’s just hope the FIFA 12 demo doesn’t disappoint, either way I know which game I will be getting.