The latest installment for the FIFA franchise is about to hit consoles and PCs in the UK, for some gamers it will have already been available for two days. For those that are more interested in gaming-on-the-go however, they will be pleased to know that FIFA 12 has been released at the Apple App Store today and can now be downloaded for the iPhone or iPad devices.

The iPhone version of the game will cost £3.99 and the iPad version £5.99. One of the most exciting features of this year’s version of the popular sports title is that if downloaded for the iPad, players can use their iPhone as a controller. This is a revolutionary function that is set to be popular amongst other games too.

EA have been enjoying a lot of success with their past downloadable versions of FIFA, with them proving to be very popular on the iDevices. Every year the game is improved including the gameplay, teams, kits, transfers and players. According to YourDailyMac this year has seen particular changes being made to the career mode on the iPhone version. Managers can now choose to let the team compete in the match without them actually controlling the players.

The feature that lets players use the iPhone as a controller also gives other options. A friend can now join in and compete against players or they can compete on the same side. When the function is activated the buttons on the iPad are transferred to the iPhone. The main issue with this feature however is that he game will need to be purchased on both devices. This will set users back a total of £9.98 if they would like FIFA 12 on both their iPhone and iPad.

Will you be getting FIFA 12 on your iPad or iPhone? 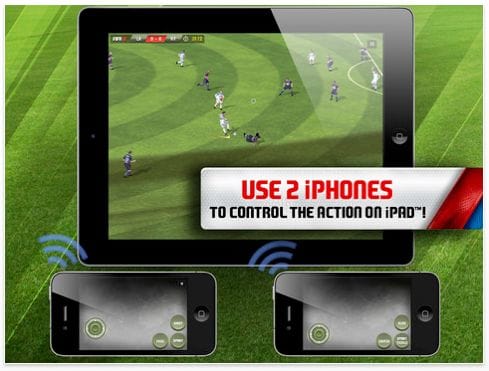