The highly anticipated release of FIFA 12 is just around the corner as football fans all across the globe prepare for release at the end of September. EA has been providing fans with a constant stream of updates for the game in the meantime and we have yet another preview trailer to show you.

This latest video focuses on the new EA Sports Football Club portion of the game, in which players will be given the chance to accumulate experience points (XP) throughout any of the game modes available in FIFA 12. There will also be a separate ‘ Support your Team’ mode, which also will tally your XP points to your real-life chosen football team.

For example, if you choose Liverpool, you’ll see a portion of your XP added to Liverpool’s overall score along with every other Liverpool supporter in FIFA 12 and teams will be moving up and down the FIFA 12 virtual season table and may get promoted or relegated depending on results. This is a very interesting addition to the game and a new feature which fans are bound to love.

With the inclusion of EA Sports Football Club and the ability to rack up XP as you play the game, we have a feeling that this is going to be the most competitive FIFA game ever, one which you’ll be talking about with your friends for weeks after the game is released. Don’t forget this trailer doesn’t even mention the online and career modes in the game, so it looks like FIFA 12 will definitely be value for money – we just hope that EA’s additional paid-for DLC content is reasonable once the game is out. 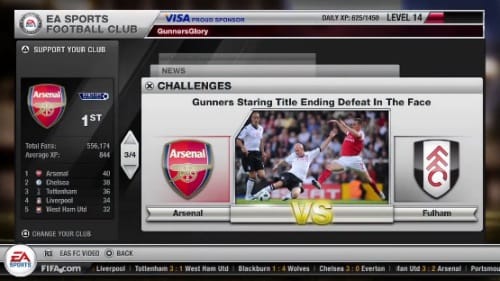 Check out the detailed trailer below which is demonstrated by FIFA 12 commentator Martin Tyler. Afterwards, tell us how impressed you are with the new features in FIFA 12 and your thoughts on the new XP system.

Which team will you be supporting in FIFA?