When we tested out the Xperia Play we were a little frustrated to see that one of the only games which came pre-installed on the smartphone / handheld console hybrid was FIFA 10, however today we have some great news for you as FIFA 12 for Android is exclusively coming to the Play.

At the bottom of this post we have embedded the debut trailer for the game, as you would expect the visuals aren’t as impressive as the version of the game which hit regular consoles, but that said things do look pretty smooth and the players are recognizable.

In the video EA highlight the game’s vibrant graphics, awesome animation, new control schemes and total touch mastery – we have to say that by the looks of thing this looks like it is by far the best-ever football game for a smartphone, in fact it looks a lot like the version of the game which came to the PSP. We were particularly impressed by the movement of the players (which suggests the Xperia Play’s controls are being fully utilized) and also the general speed of the gameplay.

Below we have embedded a screenshot from the video, we think you will agree that for a smartphone the players don’t look too bad, but why is an Arsenal player celebrating alongside Wayne Rooney, Patrice Evra and whoever that other Manchester United player is? 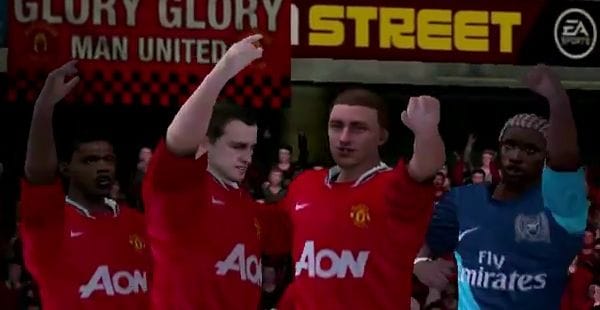 Currently there is still quite a lot we don’t know about this title, such as how much it will cost, when it will be released, what game modes there will be and whether there will be multiplayer capabilities, therefore we will have to keep you posted as we hear more.

How much do you expect to pay for FIFA 12 for Xperia Play?