If you have been feeling a bit starved of FIFA 12 coverage lately, we have a fresh update for you now which is sure to wet your appetites before EA release the game later on this month on multiplatform. The publisher has just released a brand new video preview for you to enjoy, this time focusing on the career mode featured in the game.

FIFA 12 is not due out until September 27th in the US and September 30th in the UK, but a demo is shortly on the way for both the Xbox 360 and PS3 versions of the game on either September 13th or September 14th.

In the meantime, you’ll want to check out this latest career mode trailer, as it features brand new elements not seen in the game before, as well as running commentary throughout the video from EA’s Simon Humber, the creative director for the game. The video focuses on the form and morale changes in the upcoming game and how players will need to study the new parameter changes for each player if they are going to keep every player happy in the team during your career mode progression.

On a side note, you’ll also notice the new Sky Sports news ticker at the bottom of the screen during career mode. This will display key events for you, as well as all the recent results for other teams in the leagues, just like you would see on the television channel. A simple addition no doubt, but one which hardcore FIFA fans will love. 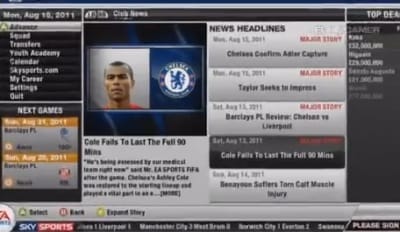 The more content we see for FIFA 12, the more it becomes clear that the game is once again likely to trump the likes of Pro Evo 12 in the head-to-head bragging rights department. FIFA 11 was clearly the better game out of the two last year, and FIFA 12 is obviously another must have game for all football fans across the world.

You can check out the video here courtesy of Eurogamer. We’re looking forward to getting our own hands-on time with the game at the upcoming Eurogamer Expo on September 22, so look forward to our opinions on the game after the event. How impressed are you with FIFA 12 at the moment?