With the recent announcement of FIFA 11 getting a much anticipated update across PC, Xbox 360 and PS3 consoles a lot of fans have been wondering whether the iPhone version would get an update also.

Well we have exciting news as the iPhone update 1.2.0 is now available to download at the iTunes Store. According to Pocket Gamer the update scored 8/10 in its review and earned their Silver Award. The full review can be read at their site here.

The EA Sports update features the one thing iPhone users have been screaming out for, that is multiplayer. It also promises to bring various fixes including frame-rate issues and also some new tutorial screens. More details about the update 1.2.0 can be found at the download screen. 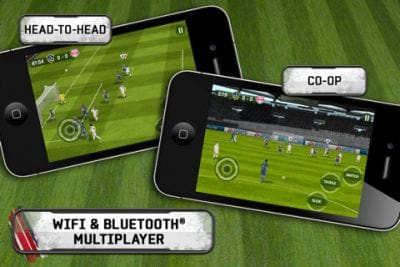 The FIFA 11 multiplayer lets you compete against your friends as you would expect to do on the console versions over Wi-Fi connection or via Bluetooth. Check out the iTunes website and download it now for â‚¬3,99/£2.99/$4.99.

What do you think of this long awaited update? Are you pleased with the updates EA has released for FIFA 11 across all the gaming devices?