We know there has been a lot of talk about the unusual appearance of Cup Noodles in FFXV. It’s a massive deal over in Japan and other south east Asia regions, but we’re here to tell you that actually there is an important Cup Noodle quest in FFXV that you all should do once it’s available.

Mid-way through the game when you head to Lestallum, head over to the Cup Noodle truck and you’ll get a quest in which Gladiolus will tell you all about how much he loves this snack.

He really does go into detail about Cup Noodles, but the point is when you have found the ingredient needed to complete ‘The Perfect Cup’ FFXV quest, take a look at the boosts available. 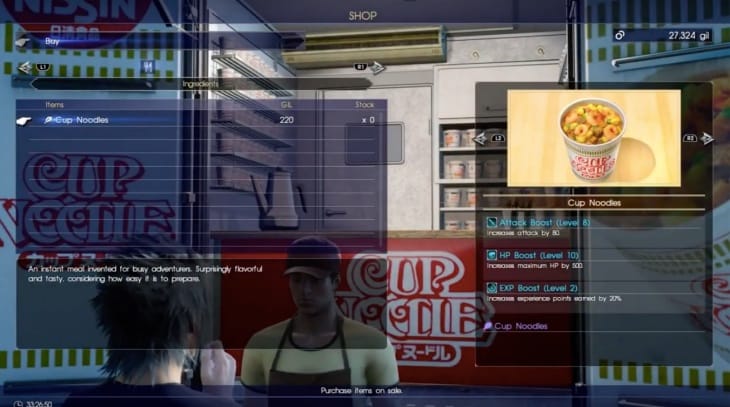 Eating a cup noodle will offer a 20% EXP boost gain to all characters and it is one of the rare food items available at camp at any time which gives an EXP boost.

We know that there’s also a 50% EXP boost at the Chocobo Wiz Post, but Cup Noodles will be readily available anywhere you go as long as there’s camp – including dungeon camps!

We can’t tell you how useful that is, so get this quest done as soon as possible. A video below shows how to get the Cup Noodles in FFXV from start to finish, so let us know if we helped you out.