We have a quick heads-up for Final Fantasy XV players now, as we know many of you are patiently waiting for the first event to begin after the release of the Holiday Pack DLC.

This is the FFXV Moogle Chocobo event which we told you about here. We previously assumed that this event was being staged at the end of January and now Square-Enix has just confirmed it. 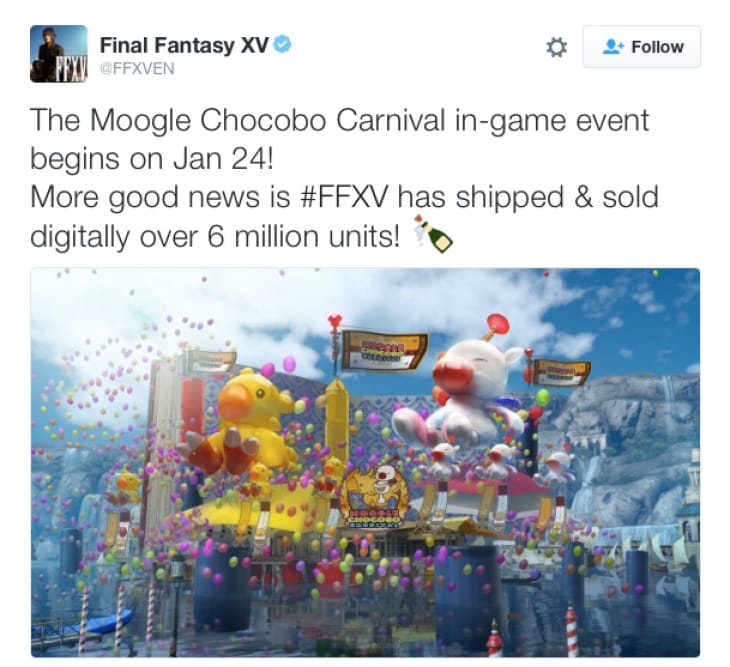 As you can see, the action kicks off on January 24 and we can confirm that it takes place in Altissa as many of you had guessed. We are still very confused as to why so much of Altissa is locked away, but perhaps this is the first step in making more of it accessible with future content.

Remember that entry to this Carnival is free! We don’t know what prizes will be on offer yet, but if it’s anything like the Gold Saucer from FF7 or FF14 then it is definitely worth taking a look.

Reminder that tickets are available by downloading the free Holiday Pack DLC from the PSN and Xbox Stores which also come with a very handy AP booster accessory.

FFXV has also sold 6 million copies globally so generally it looks like everyone has been very happy with the outcome after an unprecedented 10 year wait for this game.

Are you excited about the Carnival? Let us know your expectations and predictions below!