Most of you will already know that the highly anticipated FFXV Moogle Chocobo carnival is scheduled for January 24 and is available for free to all players that downloaded the Holiday Pack.

Now, we’re pleased to bring you the first snippet of FFXV Carnival DLC gameplay. Admittedly it is not much at all but is it enough to give you a nice tease before the event goes live.

It comes from a preview over in Japan and the screenshot we took below shows you the differences in Altissa when the event has begun, compared to the streets without it. 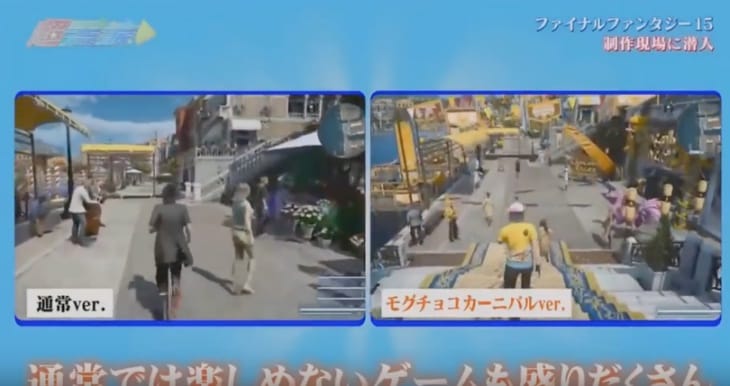 There’s a lot of props added as you can see, plus the pink Chocobo is a nice touch as well – this is just one small area of Altissa remember, we don’t know what the rest of it will look like.

Another screenshot below confirms the new part of Altissa that will be accessible with a gondola ride from the port area to the Carnival zone.

Check out the short clip below to see gameplay of it and let us know what you think. What kind of prizes do you think Square-Enix will offer without it being too overpowered in terms of gameplay?

Hopefully we’ll have more Carnival teases for you later this week.