Final Fantasy XIV servers are now down today for the 4-hour maintenance that is in preparation for FFXIV patch 3.01. All Worlds are affected by this downtime and it started on July 6 at 11PM PDT, and has an end time of 3AM on July 7. This converts to FFXIV maintenance between 7AM and 11AM in BST for UK players.

A quick blog post arrived shortly before the FFXIV server status changed, which explained they would be “performing maintenance on all Worlds”. While most gamers knew the servers would go down today and why it would be taking place, clarification was given in regard to game update 3.01. 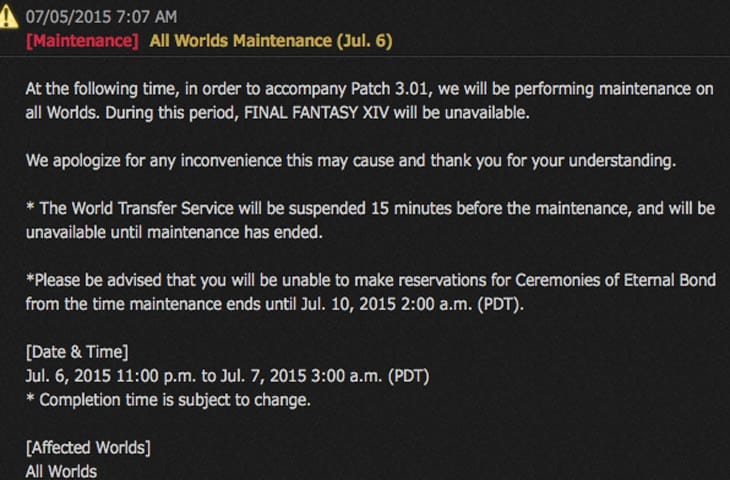 You would have seen the World Transfer Service suspended just before servers went offline. Also, players were advised that you won’t have the ability to “make reservations for Ceremonies of Eternal Bond” until July 7, 2015 at 2AM PDT.

How did this Final Fantasy XIV server maintenance impact your gaming today? From the time of posting, you should see servers return in around 3.5 hours. Service will return on time unless unexpected problems arise with the work for patch 3.01.