In a surprise move, Square-Enix has just announced that Microsoft is to get exclusive DLC for Final Fantasy XIII-2. With the company’s allegiance firmly with Sony once upon a time, PS3 owners may feel a little hard done by here especially since this doesn’t appear to be timed-exclusive content either.

Square-Enix are the latest company to jump aboard the inevitable DLC bandwagon, after previously staying clear with it with Final Fantasy XIII with the exception of a in-game item which wasn’t anything special. However, they have truly changed their feelings for Final Fantasy XIII-2 and will release some exclusive DLC for Microsoft’s Xbox 360 console only.

The DLC in question comes in the form of a weapon, which according to Eurogamer will cost 80 Microsoft Points to download. It will be available to download on February 7th, just days after the game launches in the west on Xbox 360 and PS3. The weapon has already been given a name of ‘Azrael’ and it is a bow type weapon that can only be used by Serah. Below is a picture of it so you can take a look for yourself.

According to an early description of the weapon, equipping it with Serah will give you an immediate increase in your character’s chain bonus. Other than that, there doesn’t appear to be able other benefits. Square-Enix also felt the need to point out publicly that the weapon was designed in joint collaboration with Microsoft.

So there we have it. Has Square-Enix sold their soul by not making this bow available to PlayStation 3 users? Obviously it is just a weapon that won’t alter the balance of the game too much, but it is still exclusive DLC which will no doubt cause a stir amongst many Final Fantasy veterans. If you are planning to get the game next year, let us know your thoughts on this. 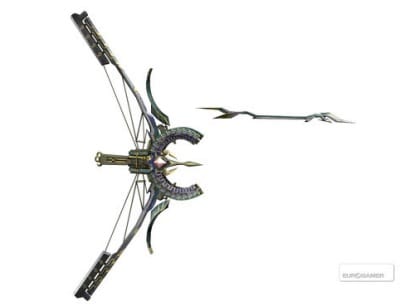