We have some new information to bring you now on the status of the highly anticipated FF7 Remake release date. Everyone is obviously hungry for any news from Square-Enix on when the game is out and now we can see that there has been some movement from retailers.

You can now pre-order Final Fantasy 7 Remake online from Amazon, who have listed a placeholder date of December 31 2016.

While this is obviously going to change at some point, hopefully it is an indication that the game is definitely due out next year rather than in 2017 which would be an agonising wait.

This game is going to be massive in terms of scale and we predict Square-Enix are going to want to take their time on it given the legacy of the original. 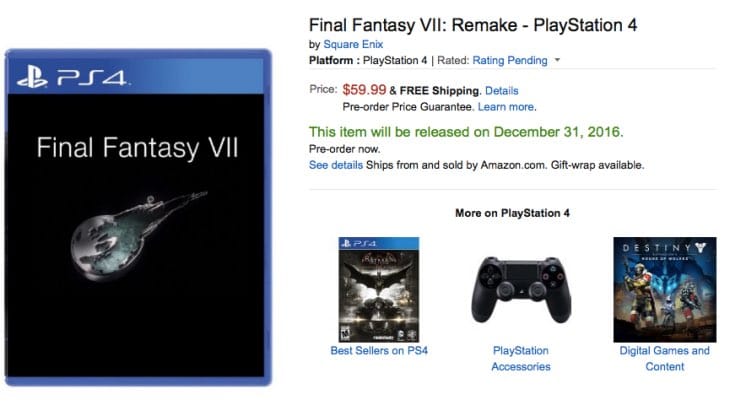 We only need to remind ourselves of the delays regarding Final Fantasy Versus XIII which is now FFXV, for an example of how long Square-Enix are willing to spend on development.

The other big talking point is that you can also pre-order FF7 Remake on Xbox One online too, despite the fact that Square-Enix has yet to confirm an Xbox One version.

Then again ‘play first on PlayStation’ is a certain indication anyway that the game will be multiplatform, but obviously Square-Enix couldn’t mention Xbox during Sony’s E3 presser.

What are your thoughts on the placeholder date – are you hoping that it will arrive at the end of 2016? Will you be getting the game on PS4 or Xbox One?