We already knew that the Enzo successor was going to make its debut at Geneva and we also had limited details on its specs, but what we did not know was its official name. We can now tell you that the name for the new hypercar is the Ferrari LaFerrari and will be a direct competitor to the McLaren P1 because they both have a racing pedigree and the fact that they are a form of hybrid.

While we learned most of the technical specifications of the LaFerrari, some important specs were still missing, such as weight. However, we now know its performance figures and they are comparable to the P1, which are a 0-62 mph time of less than three seconds for both models and a top speed of 217 mph (although 230 mph has been rumored) for the LaFerrari and 218 mph for the McLaren P1, although this could go faster but has been limited electronically. 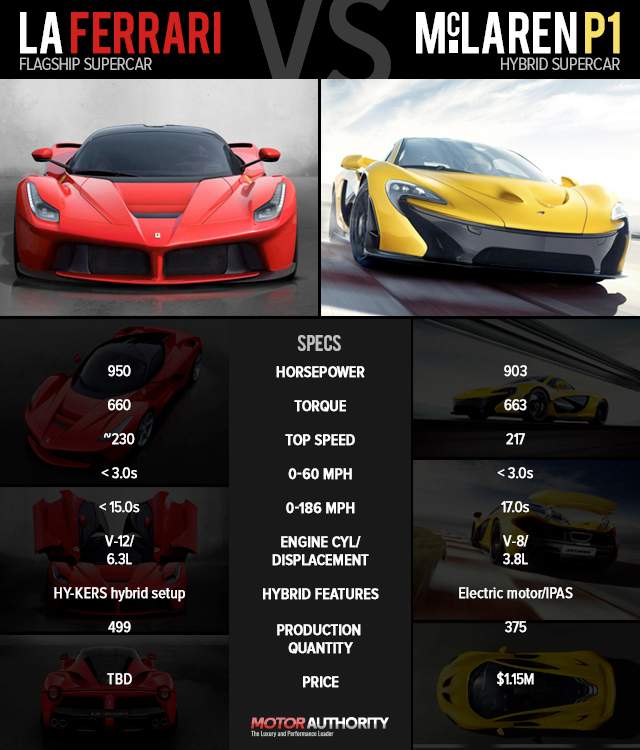 Image above thanks to Motor Authority

Above you will see the main specs of each car pitted side-by-side and it’s interesting to see how two different companies can produce a hypercar that are pretty similar in their performance — a lot like F1 in that respect. However, it won’t be until we can see both the Ferrari LaFerrari and McLaren P1 in a drag race and what their times are on the all-important Top Gear test track that we can see just how close or far apart they are.

Personally I much prefer the P1 because I feel that there is too much going on with the LaFerrari. If you are spending a vast sum of money on a car it is nice to have a focal point, but there isn’t one with Ferrari’s new beast. Having said that, this new hypercar does look insane, which is something that we know appeals to those who have the funds to purchase such a car.