The Ferrari LaFerrari review that will provide us with the driving impressions of this much-anticipated car will go live later today, at 11PM UK time to be precise. If anyone publishes the review beforehand, then they will break an embargo and could face a hefty fine from Ferrari.

It seems like a lifetime waiting for the Ferrari LaFerrari review verdict, and no doubt car fans will be counting down the hours to see just how the LaFerrari drives, and more importantly, how it compares to the McLaren P1 and the Porsche 918 Spyder.

There were only a select number of auto journalists invited to test the new Hybrid supercar out, and Autocar was one of them. Steve Sutcliffe will publish his Ferrari LaFerrari review later, along with a video, which for some will be even better than the written review. 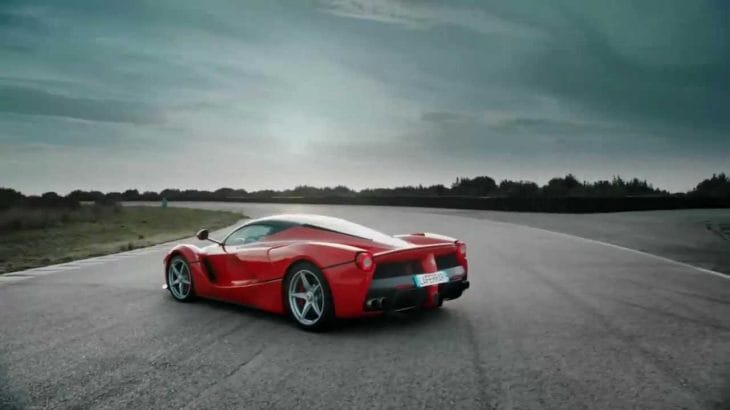 Ferrari LaFerrari vs. Porsche 918 Spyder and McLaren P1 — Sutcliffe will offer his insight as to how Ferrari’s latest and some say the greatest Prancing Horse compares to its rivals. However, what we cannot wait for is, the Ferrari LaFerrari Top Gear review showdown, as the guys will offer their own unique perspective on these three Hybrid supercars.

In just over eight hours time we should finally learn what the Ferrari LaFerrari top speed is, although we do expect it will be slightly faster than the P1 and 918 Spyder, as they can hit 218 mph and 202 mph respectively.

While we may already know some of the Ferrari LaFerrari specs, there are still many aspects that are unknown to us. Again, this should all become clear to us later.

How do you think the Ferrari LaFerrari road test will go? Based on what we know so far, it does look more likely to be a two-horse race between Ferrari and McLaren.

The very first Ferrari LaFerrari is finally out, which you can see by visiting Autocar.