A 1957 Ferrari 250 Testa Rossa has now set the new auction record for a car by $4m. The price that the car went for at Gooding & Company was $16.4 million. The same model also held the previous record back in 2009, but that did not have the history that this model had. The car in question was just a prototype, as a result only 40 were ever made.

It was back in July when there were rumors that a new record would be set, so at least it shows that there is still plenty of money to go round with the super rich — its as if the gap is increasing between the rich, working class and the poor. There are so many nice vintage cars currently doing well at auction, but it shows that the Ferrari is still something special — how can anyone not like them? 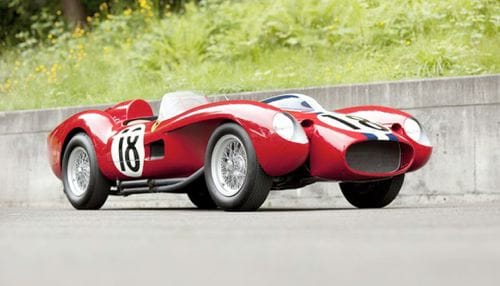 According to egmCarTech there are cases where the same model has fetched almost twice the price at private sales — who on earth would pay over $30 million for a car? This does show that people are putting more value on possessions, which is very worrying.

It was not all about the 1957 Ferrari 250 Testa Rossa, as there were other cars up for auction during Pebble Beach week. The 1931 Duesenberg Model J Coupe went for a staggering $10.3 million’ although this was still $6 million shy of the record it was the highest price ever paid for an American vehicle.

A 1937 Mercedes-Benz 540 K Spezial Roadster also got a good price, fetching $9.7 million; although it had been hoped to fetch much more — maybe buyers were saving themselves for the Ferrari? There were two other vehicles that did not fare as well as they had hoped, and those were the 1979 BMW M1 and the 1959 Fiat Tipo 682/RN-2 Transporter. The former fetched $854,000, as it was painted by Frank Stella and the latter fetched $990,000.

Do you think that the price for such cars has now gotten out of hand?