If you currently have money to blow and are thinking of getting a sports car, or you’re just interested to know for the sake of it, we now have a list of cars which are considered to be the fastest sports cars in the world for 2011. Any guesses as to which car is number one?

We have a list of 10 vehicles to show you now, and the entries on the list include a few motors which you are bound to have heard of if you’re a fan of fast sports cars. On the list provided over at TheSuperCars, the number ten ranked car for 2011 is the Porsche Carrera GT.

The Carrera GT has a top speed of 205 MPH and can reach 0-60 in an stunning 3.9 seconds. While it certainly impresses in the style department (it’s a porsche come on!), perhaps the downside is it’s price as you’ll have to pay around $440,000 to take one home.

Alternatively, number five on the list is the McLaren F1, which is slightly faster than the Carrera GT with a top speed of 240 MPH. It comes with a BMW S70/2 60 Degree V12 Engine with 627 horsepower, but the price is probably out of most people’s reach at a staggering $940,000. We love the design on this one, perhaps not a fan of the orange color though.

We’re going to skip to the top of the list and we can reveal that unsurprisingly, the Bugatti Veyron is still the world’s fastest sports car, with a top speed of 267 mph and the ability to reach 0-60 in a mindblowing 2.5 seconds. Good luck trying to pick up the newest Super Sport version though, it will cost you a cool $1,700,000 if you can get your hands on one somewhere. 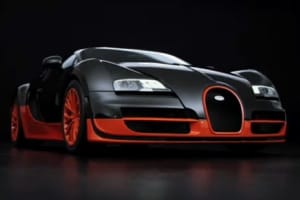 Are you surprised that the Bugatti Veyron remains the fastest sports car in the world? You can view the top ten list in the link above. We’ve included a video of the Super Sport Bugatti Veyron for you to watch below.