As we told you earlier, the surprise Fallout Shelter download for iPhone is already live for some countries. Right away though, we are getting a few reports that Fallout Shelter crashes after choosing your vault number.

We ourselves had no problems after choosing our vault number – a somewhat stressful decision in itself after taking a few minutes to decide what number to go with since it can’t be changed – we eventually settled with 444!

As you can see from some of the early Shelter feedback on Twitter though, there’s quite a few replies stating that crashes are happening immediately after choosing your vault number. 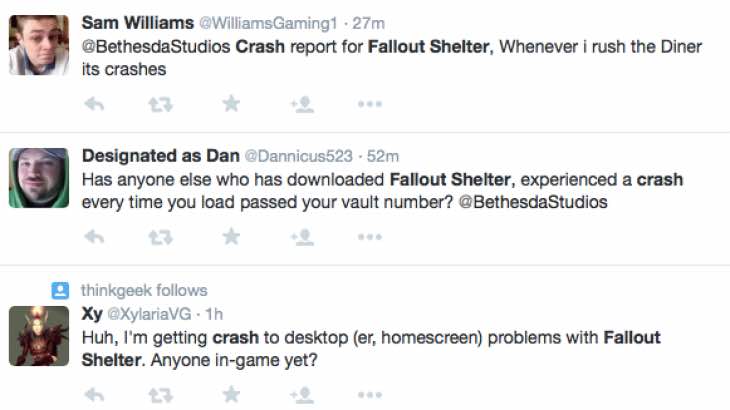 Hopefully this doesn’t become a serious problem and to reiterate we didn’t see the same problems. It’s definitely happening to some though and we may see a quick update from Bethesda if the problems continue.

On the whole though, we love the design of the app and it’s actually pretty amazing zooming in to a particular room and seeing all of the dwellers up close and personal as they get on with their tasks for the overseer.

Let us know below if you have just installed the game and have seen some crashes happening. Does it happen straight away after choosing your vault number?

Also feel free to share your vault below, as we’re sure it will come in handy in terms of friend interaction once everyone gets to grips with how the app plays.