It has been over a week since we last spoke about the highly anticipated Fallout Shelter Android release date, which continues to be met with silence as there’s still no sign on when the game will be available.

Some Android owners still can’t fathom the fact that such a high profile game wasn’t made available on the ‘world’s most popular mobile platform’.

The last we heard from Bethesda on when Fallout Shelter for Android would be coming out, is ‘in a few months’ – but that was pretty vague most will agree.

Skip forward to today and you have probably heard that Fallout Shelter has officially become the most popular game on the App Store charts in 48 countries around the world. 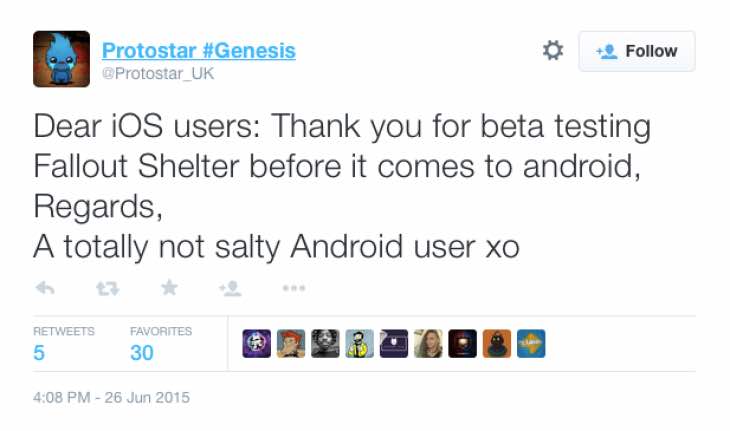 Given that the game only been available for near two-weeks, this is pretty amazing and testament to the skills of Bethesda’s team behind the scenes.

Then again, it also poses the question at the same time on how greater those sales could have been if Fallout Shelter had a simultaneous launch on iOS and Android.

On social media, we can see that some Android fans are getting frustrated over this, with some even saying that they have ‘lost interest’ now given the long wait with no solid information.

What are your thoughts on the wait – are you happy to hold on for Fallout Shelter on Android as long as Bethesda gives a release date soon?

Is this a case of sour grapes or do Android owners have a case to feel aggrieved here?