We have a welcome update to bring you now, on the status of the highly anticipated Fallout Shelter release date for Android in 2015.

The last time we spoke about the game, we told you that it had launched exclusively on iPhone in a surprise announcement during Bethesda’s pre-E3 event.

Now though, we can finally confirm that the game will be coming to Android eventually. While there is still no solid date to share with you sadly, Bethesda has Tweeted to say that they are working on the Android version and that it will ‘hopefully be out in a few months.’ 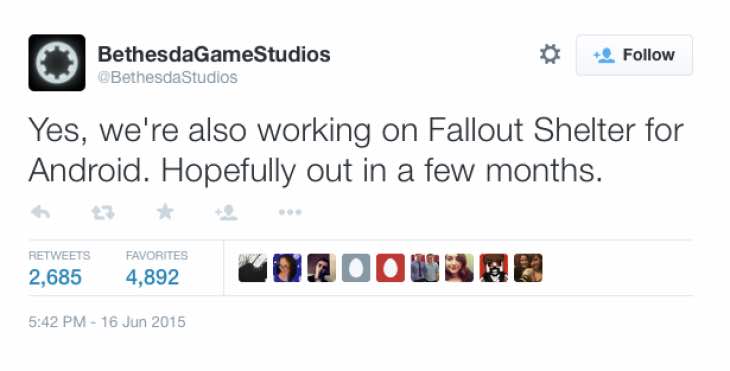 Given the widespread disappointment that the first notable Fallout game on mobile had an exclusivity deal tied to it with Apple, this should cheer some of you up a bit.

Meanwhile, Fallout Shelter has skyrocketed towards the top of the App Charts and also managed to outsell Candy Crush for two days too which is by far no easy task.

With Bethesda now comfortable letting out the information of the two month release window, it also perhaps suggests that Apple wanted at least two months of exclusivity before the game came to other platforms.

As an Android owner, are you still desperate to play Fallout Shelter or has the excitement gone for you now hearing that it will be another two months before you can play?