Bethesda has just launched a major new Fallout Shelter 1.2 update for Android and iOS. However, we are getting numerous reports from players that Fallout Shelter is crashing and freezing a lot after installing the latest update.

Fallout Shelter is an amazing little game when it works, with the newest updating adding even more ways to get your bite-sized Fallout fix before the grand arrival of Fallout 4 next month – full Fallout Shelter 1.2 update notes can be seen here over at Bethesda’s website.

When it doesn’t work though, it can be a frustrating experience to say the least. Many users are complaining of Fallout Shelter 1.2 crashes and freezes, on both Android and iOS versions.

One frequent issue that seems to occur, is a Fallout Shelter 1.2 crash when clicking on a returning Dweller. 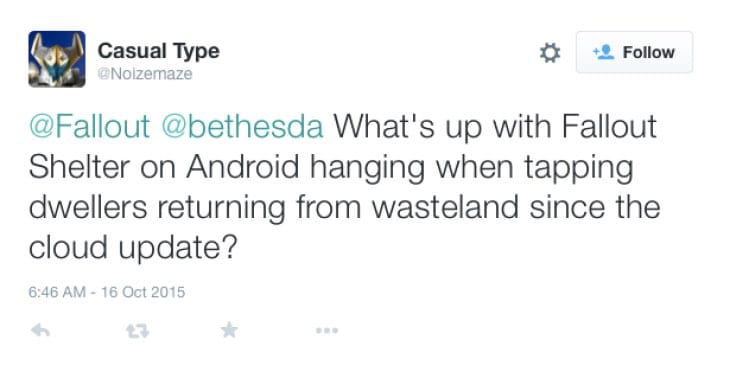 Evidence on this happening for both versions can be seen in the Tweet above for the Android update and also by reading through comments on the Fallout Shelter iOS page which states the same crash happening after clicking on the Dweller.

If it continues to happen, Bethesda may have to release Fallout Shelter 1.3 sooner than expected. For now though, let’s help them out as they are obviously a very busy studio at the moment.

Does your Fallout Shelter 1.2 crash, freeze or hang after installing the latest update in certain situations?

Let us know your experience on the new update below.